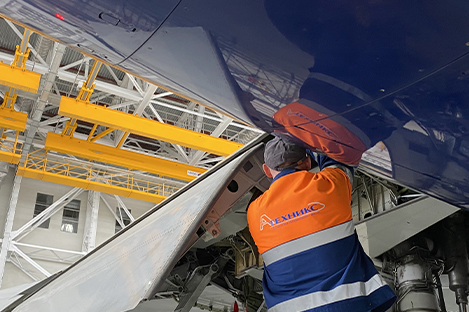 As part of the audit procedure, EASA inspectors inspected the production, warehouse and office premises of the company's hangar complexes at Sheremetyevo Airport, checked the work of departments, the level of professional training of personnel and studied the organization's documents.

The EASA audit confirmed the highest level of organization of maintenance by A-Technics, which fully complies with all the requirements established by the European Aviation Authorities and ensures the maximum possible control of the technical condition of aircraft. At the final briefing, EASA representatives separately noted the excellent working conditions and cleanliness of the production facilities in the new hangars, as well as the high level of competence of the staff.

Pavel Baranov, Head of the A-Technics Quality Control and Assurance Service, said: «We are satisfied that the company has once again successfully passed the audit of the European Aviation Safety Agency. This is the merit of the entire A-Technics team. Passing such audits allows not only to continue the stable activity of the organization, but also helps in expanding the competencies and development of the company in the future.»

The Part-145 certificate entitles the organization to carry out maintenance of European-registered aircraft, as well as engine repairs, structural repairs and non-destructive testing.