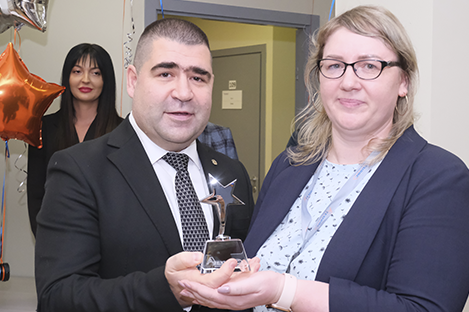 On December 7, A-Technix celebrated the sixth anniversary of its foundation

On this day, the company received numerous congratulations from the aviation authorities and the company's partners.

The head of Rostransnadzor Basargin V.F., the acting head of the Central MTU of Rosaviation Garkovets V.V., the general director of the Rossiya Airlines Alexandrovsky S.V., the management of the aviation scientific center of MAI and others sent their congratulations to the A-Technics team. The company was congratulated on social networks Aeroflot airline and Sheremetyevo Airport.

The head office of the company hosted a solemn event and awarding of employees on the occasion of the birthday of A-Technics and the International Civil Aviation Day.

On the part of Rostransnadzor, letters of thanks were noted:


For the first time, a new award of the A-Technics Star company was presented at the event. Its first nominee, by unanimous decision of the heads of departments, was Elena Minakova, head of the planning and dispatching department. This award will be awarded annually to the best employees of the company.


All the awardees were presented with commemorative certificates and valuable gifts with the symbols of A-Technics.