A-Technics at the open day of the Aviation Institute 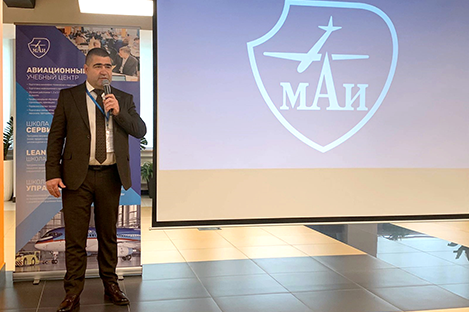 A-Technics took part in the open day of the Moscow Aviation Institute.

On October 15, 2021, the Moscow Aviation Institute hosted an Open Day of the Aviation Training Center, which was attended by the management and employees of A-Technics.

At the opening ceremony, along with representatives of the MAI and aviation authorities, Mikhail Korobovich, General Director of A-Technics, made a welcoming speech. He thanked the organizers for the event and noted the importance of holding such meetings to discuss topical issues of training engineering and technical personnel in the conditions of the recovering air transportation market.

Yulia Chichko, Head of the A-Technics Personnel Management Service, took part in a discussion on the interaction of the educational institution and the employer on the issues of training and employment of graduates.

Within the framework of the event, a unique opportunity was provided to learn about the new programs of the center, development plans, get acquainted with the management staff and personally ask questions, get acquainted with the requirements and plans of the educational process. An excursion was held for the guests with a visit to the experimental laboratory of technologies and structures of aErocOmposite JSC, the laboratory of the Institute of Aviation, Rocket Engines and Power Plants, the layout of the Almaz orbital station and much more.

Recall that A-Technics and MAI have long been linked by close and fruitful cooperation in the framework of training and advanced training of engineering and technical personnel.